Prior to 1870, Mass services were irregular due to the scarcity of priests and difficulty of travel. From 1874 to 1883, Mass was held in private homes, often infrequently. Priests from surrounding parishes came to celebrate the liturgy with 50 or so Catholics in the area. On December 1, 1883, property was purchased from C. R. Robinson by Reverend Janssens, Bishop of Natchez. The site for the church was considered to be one of the prettiest in Raymond . Quiet and secluded but accessible to members, it was also near the railroad depot, a means of transportation for priests serving the church.

In 1885, Reverend Paul Korstenbroek, pastor of Greenville, MS, succeeded in building  Immaculate Conception Church. Russell Patrick of Vicksburg, MS was the contractor who erected the 25×40 foot building. The roof was arched with walls about 18 feet from floor to plates. The inside of the building was  finished in plaster with intricately designed sugar based plaster molding around the top of the walls. There were 54 members of the church at that time. Raymond was attended by priests from various places, including Natchez, Woodville, Port Gibson, and Vicksburg. The church was dedicated on September 6, 1885. 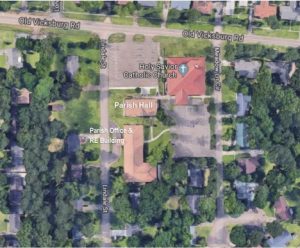